From scientific research to social media, the trending word in 2019 was ‘plant-based’. According to many social sites, this trend is set to continue into 2020. As such, it is not surprising to see that the demand for plant-based foods has increased exponentially over the last decade. Market research company Innova Market Insights® reported an estimated 62 % compound annual growth rate for plant-based foods globally between 2012 and 2017. In the scientific world, Web of Science® reports a 30-fold increase in the number of publications related to plant-based food(s) in 2019 compared to 2001. This post is an attempt to disseminate science-based information on plant-based foods from the environmental, nutritional and consumer perspectives. The motivation behind this blog is NOT an advice on how to eat sustainably instantly, but to bridge a collection of information gathered from social sites and research articles for an easy-to-read experience.

The global food production system has a major role to play in terms of sustainability of the planet. The impact on the environment is seen in the form of greenhouse gas emissions, land, water and air pollutions, loss of biodiversity, etc. To give an estimate, the United Nations Intergovernmental Panel on Climate Change (2014) reported that 24 percent of the greenhouse gases are associated with the food and agricultural sector (Figure 1). This is next to the contributions from the burning of coal, natural gas and oil for energy generation, which contribute to about 25 percent of the emissions. A detailed explanation of the terms in the figure can be found in the IPCC 2014 report, Climate Change 2014 Mitigation of Climate Change. Hence, creating awareness of a sustainable and planet friendly food habit or ‘diet’ is of primary importance. The title of Mike Berners-Lee’s popular 2019 book aptly captures the essence of it – There is no planet B. 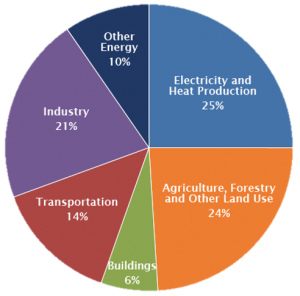 The question now is ‘What is a sustainable diet?’ In 2010, FAO adopted an agreed definition of sustainable diets as “Those diets with low environmental impact which contribute to food and nutrition security and to healthy life for present and future generations. Sustainable diets are protective and respectful of biodiversity and ecosystems, culturally acceptable, accessible, economically fair and affordable, nutritionally adequate, safe and healthy, while optimizing natural and human resources” (Burlingame et al., 2010). To better understand what constitutes a sustainable diet, scientists at the UN Millennium Development Goals proposed five determinants of sustainable diets: 1) agriculture, 2) health, 3) sociocultural, 4) environmental, and 5) economic. A change in one determinant affects the other determinants, which in turn affects the level of sustainability of a diet (Johnston et al., 2014). To put this definition into another perspective, the different diets can be compared based on these sustainability determinants. There are already numerous studies available online in this aspect. In fact, in a study published in Nature (Tilman and Clark, 2014), the Green House Gas (GHG) emissions of different food items and diet patterns were compared and showed that plant-based food items has a lower GHG emission compared to eggs, dairy, fish and livestock (Figure 2). 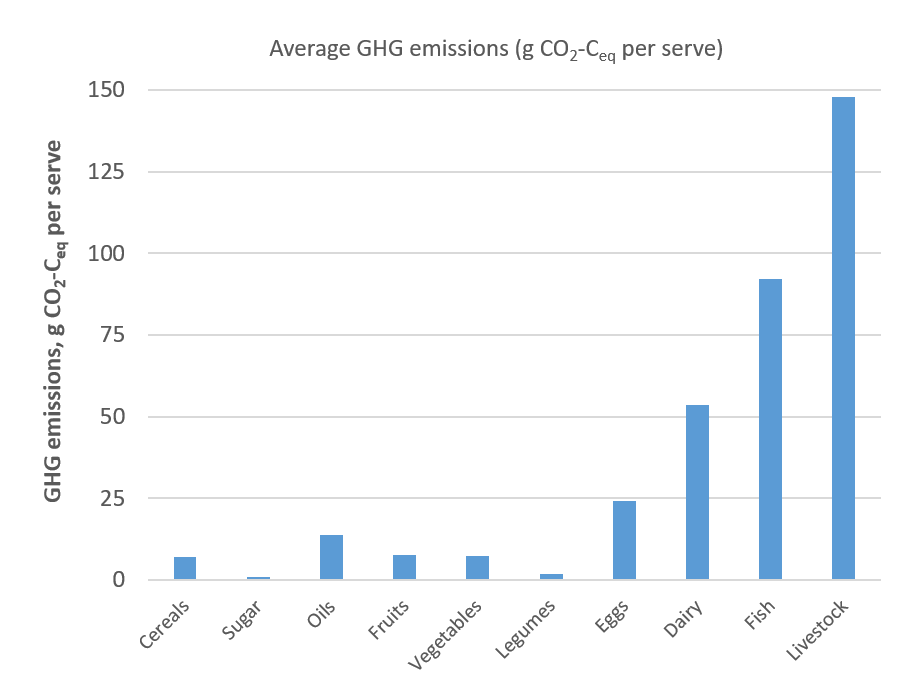 Researchers at the University of Navarro, Spain found that a plant-based food pattern was associated with a reduced risk of all-cause mortality. A plant-rich Mediterranean diet supplemented with extra-virgin olive oil or nuts exhibited a lower risk of cardio-vascular diseases amongst participants (Martínez-González et al., 2014; Fresán et al., 2018). Interestingly, a meta-analysis of 10 such prospective studies concluded that a higher adherence to a plant-rich diet reduced the risk of type II diabetes by 23% (Koloverou et al., 2014). In another study across the USA and Canada, the occurrence of colorectal cancer, colon cancer and rectal cancer were reported to be much lower in vegetarians compared to non-vegetarians (Orlich et al., 2015). Scientists in the UK also conducted a pooled analysis of two prospective studies of over 60.000 British population in 2014 (Key et al., 2014). The study reported a lower risk of cancer in fish eaters and vegetarians compared to meat eaters. In a nutshell, various scientific studies amongst different food patterns across different geographies point towards the huge potential of a plant-based diet in preventing a number of chronic diseases. This observation has also been reflected in the recommendations of the dietary guidelines for Americans of 2015-2020 that encourages a plant-based diet (USDA, 2015). Hence, there is enough evidence to support that adopting a plant-based diet is beneficial not only for the planet but also for your own health and well-being.

In spite of the benefits offered by plant-based foods, changing to a plant-based diet by majority of the population is understood to be a difficult proposition for the consumers (Lea et al., 2006). Two main hypotheses were observed: 1) the consumer connection towards meat relates to the perception of the impacts of meat and the willingness in altering the consumption habits and 2) some arguments resembling moral disengagement mechanisms (e.g., pro-meat justifications; self-exonerations) arise when some consumers weigh the impact of meat production and consumption, and the possibility of altering habits (Graca et al., 2015). An alternative to increase the intake of plant-based foods is through plant-based meat analogues. Beyond Meat and Impossible Foods are two start-ups driving this market. According to a TIME magazine article, both companies have raised millions ($275 million for Impossible Foods; $72 million for Beyond meat) to invest in meat alternatives. Yet, the sustainability aspect of the production process of these alternatives are yet to be thoroughly investigated.

On the other hand, many consumers are also making conscious food choices by opting for plant-based foods and driving the market. This is evident from the double-digit growth posted by plant-based food options in the US alone (Nielsen Product Insider, 2018). The same study found that the sales of plant-based foods grew by 20 percent in 2018 reaching a total of $3.3 billion while the growth in the overall food category was at just 2 percent. This trend is also noted by major food companies, which are heavily investing into the plant-based market through acquisitions, e.g. Danone acquiring non-dairy milk company Alpro, Nestlé acquiring plant-based company Terrafertil. It should also be noted that the plant-based food business is quite small compared to the trillion-dollar meat industry. On a positive note, it also provides an ample space for plant-based innovation.

Plant-based diet is a broad term consisting of different dietary patterns. A general characteristic is the consumption of major portions of plant-based foods. Scientific studies have shown that such a diet pattern is not only environmentally more sustainable but also nutritionally more beneficial. The current market trend looks promising for plant-based food products where an exponential increase in revenue is noticed. With large segments of consumers still unwilling to shift to a pure plant-based diet, it presents an opportunity for scientists to conduct more consumer-driven studies into plant-based foods.